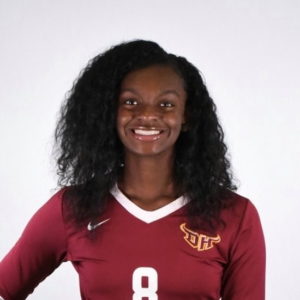 Currently she is a member of the Cal-State Dominguez Hills volleyball team as a middle blocker. As a high school player, she was named the Sac-Joaquin Athletic Association All-League MVP and Offensive Player of the Year where she also led Bear Creek high school in kills. Samaya played for Rage Volleyball Club in Ripon from 2015-19 leading her team to the Junior National Championships twice. As a prep all-star she represented the 2018-19 Record Preps team. Samaya served as an assistant coach for the Boys Bear Creek volleyball team ‘18-’19.